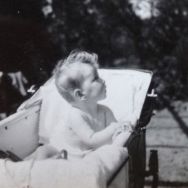 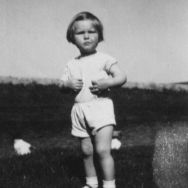 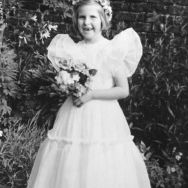 What people are saying about Sarah Harrison

Writing’s been my favourite occupation since I was eight. Back then I filled exercise books with stories about anthropomorphic animal heroes and rather less believable human ones. When I consider the amusement these juvenilia would have afforded my children and grandchildren, I regret the fit of teenage self-consciousness that prompted me to throw them out.

There have been several talented writers in my family – my grandmother, my great uncle (also an actor), and my cousin, the novelist Celia Dale – and I’m eternally grateful that I got some of their genes. The performing bug I inherited from my mother, who in 1936 gave up a promising acting career to marry my father, a young officer then serving in Palestine.

I spent much of my babyhood in post-war Berlin – snapshots show me looking like a well-muffled turnip in my woollen pixie hood in the notoriously icy winter of 1946. We returned to England but then it was off to Singapore and Malaya, then Germany again from where at the age of nine I came back to boarding school in the UK.

It was during my boarding-school years that it dawned on me that writing might be more than just an enjoyable pastime. For the first and only time I had something more precious than rubies to any writer – a captive audience and unlimited (and extremely frank) feedback.

After school I read English at London University, and then had the great good fortune to be taken on by IPC Magazines, where I worked for four years on Woman’s Own. It was a great apprenticeship, but my dream was still of writing a novel, and once I’d begun regularly to sell short stories I left to go freelance and concentrate on fiction.

I produced two books, ‘A Dangerous Thing’ and ‘The Divided Heart’, which were turned down at the time but have since been published. In the wake of those rejections my agent Carol Smith introduced me to Rosie de Courcy of Futura and as a result of that meeting I was commissioned to write a book set in the First World War but with a women’s angle.

That book turned out to be The Flowers of the Field, the bestseller that enabled me to call myself a novelist.

Over thirty five years – and as many books – later, I sometimes have to pinch myself to believe that I make my living doing what I always dreamed of, and like best.

I’ve never wanted to stick to one genre. For me, one of the pleasures of fiction-writing is its chameleon quality – the opportunity to adopt a different tone, to enter different worlds and get inside the heads of different characters as well as vary the size and scale of the book. I think this fits in with my love of performing. My novels range from, among others, the epic (An Imperfect Lady, The Grass Memorial, The Dreaming Stones) to the full-on comic (Hot Breath, Cold Feet, Foreign Parts) taking in frothy fun (The Red Dress, Matters Arising) and the downright unclassifiable (Swan Music, The Nightingale’s Nest, A Spell of Swallows, Secrets of Our Hearts) along the way. It’s a mood thing – each one has been my favourite book while I was writing it.

I dread that question about ‘writing routine’, and get round it by saying what I believe to be true, that to be a writer you must have a life – family, friends, and lots of other stuff going on. To each his own, but all I can say is this approach has yet to do me any harm!

Not only, but also

Being a novelist has opened up other doors. I’ve been lucky enough to do lots of broadcasting from Question Time to quiz shows. And talking about my books in libraries, at festivals and literary lunches has led to after dinner speaking, to song-, verse- and sketch-writing for Pulsatillas!, and even to stand-up comedy.

Now I have a new publisher, Orion, a work in progress on the hard disk, shows in the diary, and the challenge of the open mic beckoning…

I think the phrase is: ‘Bring it on.’